My ADA Story: The ADA Sparked my Mission

Our ED, Keith Greenarch, recently wrote the following for the North Carolina Council on Developmental Disabilities in honor of the 30th Anniversary of the Americans with Disabilities Act. 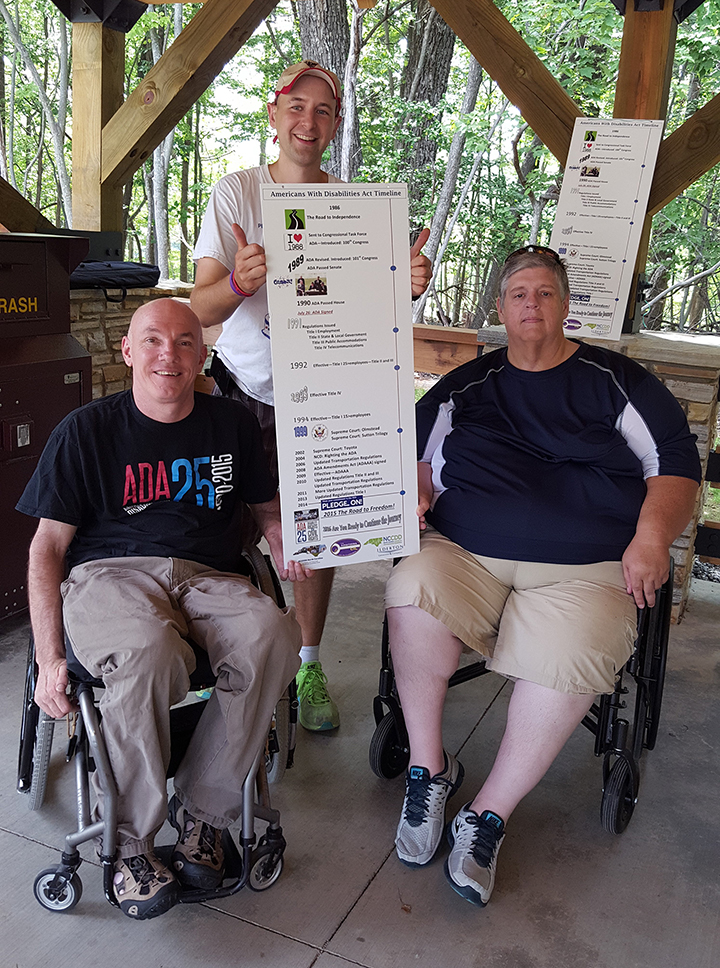 I can’t remember what I was doing July 26, 1990 other than raising two kids, working a stressful and demanding job. I never paid any attention to what was going on with people with disabilities and their movement. Like most Americans, it didn’t pertain to me.

Well, let’s fast forward to 2002 when I was hospitalized for one year due to complications from surgery. Talk about being institutionalized, that’s nothing compared to people living in nursing homes and other places with restrictions. This time gave me a whole new perspective on disability. I have a physical disability that requires the use a wheelchair along with emotional issues. I had no resources other than my family and the help they found for me. I was now a person with a disability and I believed I’d never work again.

Man was I wrong! After returning home and months of physical therapy along with tough love from my family, I was making a comeback. I finished college thinking I wanted to work with computers. Another idea . . . wrong.

I was introduced to the Independent Living (IL) World and went to work in an IL Center and began learning the ropes. In about six weeks it dawned on me . . . this is where I am supposed to be. I was given opportunities for training that included the ADA and Nursing Home Transitions. The more I learned, the more I wanted to learn. The more I wanted to help everyone with a disability.

Something else I realized was the signing of the ADA paved the way for me to accomplish getting through college, accessing the school, businesses and work. Wow . . . so in the 1980’s and 90’s, there were people advocating for me, and I didn’t even have a clue. That is powerful! I have the utmost respect for those warriors that paved the road to the passing of the ADA. There are still physical and attitudinal barriers that exist in every town, so our work continues. This can be addressed by providing community education and advocacy for change. We need to make sure the torch of the IL Movement gets passed to our youth and the IL Philosophy is at the forefront of who we are. The passage of this important act from a day in July 1990 that never caught my attention has changed the way I can live my life independently and in the community of my choosing. I can dine out, shop, worship and enjoy a concert because most are accessible.

On the tenth anniversary of my surgery while attending a Transitions Conference and standing on the western bank of the Mississippi River in St. Louis, I thought . . . ten years ago I would have never dreamed I’d be here. But I am, thanks to God, my family and the thousands of people who work everyday to make sure that people with disabilities have equal access and choices. I say thank you! As Justin Dart said, “Lead On.”

Please visit the NCCDD blog for more stories celebrating the ADA this month.